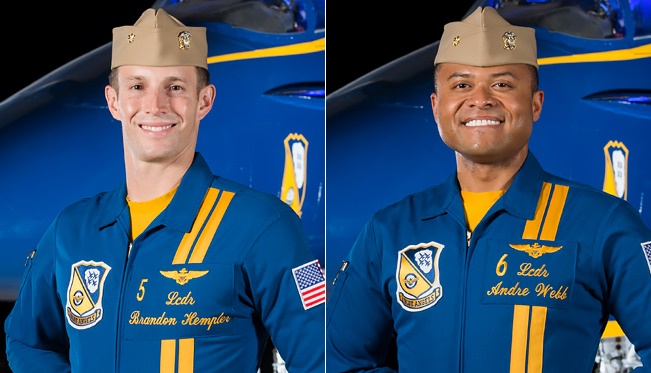 After noticing that Blue Angel #6 LCDR Andre Webb had not performed or traveled with the Blues for the last two performances of the season, including the NAS Penscola Homecoming Air Show, NewsRadio was originally informed that Webb was absent for undisclosed personal reasons but would return for the 2020 season. Blue Angels Public Affairs now confirms to NewsRadio that Webb has left the team permanently and taken a position returning to the fleet. Webb would have been the #5 Lead Solo this coming year.

Taking his place for the 2020 season will be LCDR Brandon Hempler, who just completed his third season with the Team as the #5 pilot this year. This will be Hempler’s fourth year with the Blues, as he has previously been the #7 Narrator, #6 Opposing Solo, and #5 Lead Solo, which is the normal three year track for the solo pilots. (The Diamond pilots #1-4 typically fly with the team for just two years.)  No other explanation has been given about the change.

We welcome LCDR Hempler back to the Squadron and wish LCDR Webb all the best in his return to other duties.