If you watch, read, or listen to the news, you will have undoubtedly heard various forms of dire warning about how cases across the United States are spiking, rising, and even exceeding daily records in most of the United States (including Washington DC and Puerto Rico).  This is often presented as a picture of the country with all the “increasing” states colored red to show visually how widespread the surging is.  The takeaway from these reports is that almost the whole country is doing very badly, even doing worse than ever in history before.  Since good, informed reporting on this pandemic is notoriously less well-informed than I would prefer, I decided to dig into the data for myself to see whether these reports and the impression they leave are accurate.  Here is what I found.

(1)  Using charts daily produced by the Covid Tracking Project (CovidTracking.Com), I grabbed the snapshot of every state plus DC and Puerto Rico. I then looked at the daily new case and daily current hospitalization charts (the middle two of the four for each one).  To describe the curves, I use the terms spiking, up, mild, flat, and down.  To describe the comparisons between current levels and previous records, I use the terms, above, same, below, or way below. 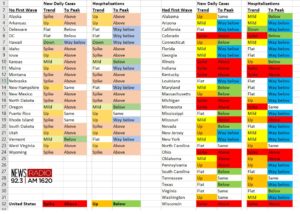 (2)  22 of the 52 states/territories (including Puerto Rico and the District of Columbia) have never had what I would consider to be genuine first waves.   Their highest current hospitalizations were never above about 500, and many were much lower.  This means that trendlines and data in those regions are already going to be difficult to compare to the states which have seen significant first waves.  Since these 22 never saw a big first wave, any new increase in either cases or hospitalizations will automatically look bad on the chart.  The slope of the curves will be exaggerated and the likelihood of hitting new records with any surge will be high.  Think of it this way, hitting a daily record number of new cases in New York would require 10,000+, but hitting a new record in New Hampshire would only take 120.  So claiming there are “record new cases” in X amount of states doesn’t really tell you much if most of those places never had significant numbers to begin with.

(3)  It’s true that in the 22 places that are statistically less useful, the patterns are generally bad. 16 of them have spiking or up cases, including 15 setting records.  In those same 22 places, hospitalizations are spiking or up in 14, ands 12 are setting records.   These 20 states and two territories are concerning.  However, keep in mind the overall actual levels in these states are still low compared to the highs experienced in the other 30 states.  They are definitely not improving, but the degree of calamity in these areas is yet to be determined because the overall numbers are not very high yet.  Also, this is really their first wave, not some resurgence after having beaten back a large initial wave or two.

(4)  Out of the remaining 30 states (which had a significant first or even second wave already), 16 are spiking or up in new daily cases, with 11 seeing record numbers. In contrast, 14 of these states are flat or seeing only mild increases in case numbers with 14 seeing their daily new cases below or way below the peak.  This means that states which have already had significant outbreaks are about evenly split between ones that are doing well and ones that are doing poorly right now.  As for hospitalizations, however, the situation is even better.  14 of the 30 states are seeing hospitalization numbers spike or go up, but just 6 are seeing record-setting levels.  Meanwhile 15 of the 30 are seeing hospitalization numbers either hold steady or go up mildly.  But when it comes to comparing to the worst peak point in the pandemic, 24 of the 30 are either at or below peak levels, with 17 of them way below the prior peak.

DISCUSSION
Admittedly, studying the country this way is not the ideal.  For one thing, states vary greatly in their population size, and thus treating each state as its own unit is problematic.  But I did it this way because this is the way the news reports keep talking about the country, so I thought I would use their paradigm and see what I found.  In my estimation, the way this is being presented in most newscasts is exaggerated and even misleading.  It’s certainly true that country is doing worse than it was a few weeks ago, but the country is not doing worse than it was at either of the historically bad periods of late April or early August.  Moreover, most of the truth in the “X states are seeing case increases” narrative comes from those states that have never seen significant outbreaks prior to this.

A lot is currently being made of the record number of recent new daily cases.  It’s true, as a country, total new daily case numbers are up above previous records.  However, we are also doing an even more record-setting amount of testing.  In fact, we are doing proportionally more testing than we are finding new cases, which is why the positivity rates for the country are at pandemic lows of around 3.5%.  An enormous number of tests are being returned in the past week or so (almost 2.5 million a day vs 1 million a day a week ago).  So, testing is up massively, cases are up significantly, and hospitalizations are up somewhat, but positivity rate is down and daily deaths are down as well.

I wasn’t particularly going into this survey to look at death data, but there is a very telling fact that you will notice if you look at the state charts.  The majority of them have declining death rates, and the ones that have increasing death rates are the ones that never had an outbreak and the total number of daily deaths is still relatively low.  In fact, there isn’t a single state seeing daily death totals above 50 and increasing.  Wisconsin is the closest with around 40 as an average and trending up.

All State Charts and United States