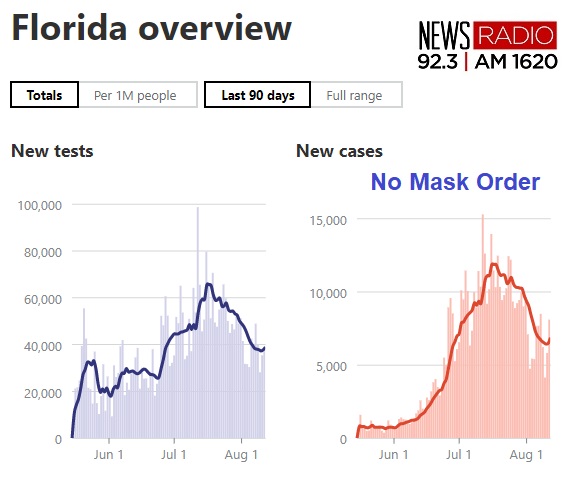 OVERVIEW:
Like many conservatives, I find myself very conflicted about mask orders or mandates.  On the one hand, I believe in the value of everyone wearing face coverings, and I have been advocating as much and wearing one myself since even a few days before the CDC said to do so.  Wearing a good mask is smart and helpful in limiting the spread of this virus, and this article assumes that from the start.  On the other hand, I hate using government to force people to do something smart and helpful unless that’s the only way to get necessary compliance, usually as a last resort.  It was with this conflict in mind that I decided to study all 50 states and Puerto Rico to see whether I could find evidence that statewide mask orders (SMOs) are effective at reducing new cases.  I genuinely didn’t know what I would find, but I came away with the conclusion that SMOs do not have any clear benefit compared with just strongly recommending people wear masks in public.

METHODOLOGY:
An extremely useful website covidtracking.com offers a fairly comprehensive snapshot of each state’s new daily case count (among other things) in a graphic form that’s easy to understand just by looking at it.  You can see red lines for the daily count and a black curve for the 7 day average of those cases.  In each state’s case, I hovered over the date they implemented an SMO and then compared the patterns to see what conclusions could be drawn.  I predicted that if SMOs were very effective, I would see a consistent pattern where the slope of the case curves were reduced noticeably in a roughly two week window after the SMO was implemented.  As we all know, it takes time for any mitigation strategy to show up in the results, and the vicinity of an incubation period (14 days) seemed reasonable.   If I saw this or another similar “flatten the curve” pattern in a large number of states (ideally at least a majority), that would have been good evidence SMOs work.  If I found any other pattern or a wide variety of patterns, that would be evidence that SMOs were likely ineffective.

As I looked at the chart of each of the 34 states and Puerto Rico that have an SMO, I placed that state into a category based on the pattern it showed.  In each case, I tried to ask myself what conclusion I would draw about SMOs if that state were the only evidence I had, without thinking about what I was seeing in other cases too much.  In doing this, I identified eight patterns in states with SMOs.  As a control, I also looked at the patterns in the 17 states without SMOs.  These I grouped into two categories.  Below are the definitions of my categories and the states that I put into them along with any parenthetical note I think will help you interpret that state more accurately.

LIMITATIONS:
Obviously, this is a clumsy over-generalized survey of data that in each state’s case is complicated by many, many factors.  For instance, a state might have many local mask orders even without an SMO, and a more comprehensive study would study data at the city and county level.  Also, states will vary tremendously by when and how adamantly the state leaders encourage mask wearing despite not implementing an SMO.  Moreover, the daily case count data is certainly influenced by other factors such as total or partial shutdowns or other restrictions aside from an SMO that are in place.  For instance, there was a period in July when national retailers all started to require masks in their stores, thus creating a very partial sort of National Mask Order that was not an SMO but still had effects in all the states simultaneously.  All these factors muddy the clarity of any conclusion drawn from these charts, and I’m sure there are other variables I’m not including here such as weather, protests, and testing capabilities.  And not to belabor the point, but obviously different SMOs come with varying penalties, enforcement, and levels of compliance.  Nevertheless, if the basic idea of having an SMO is sound, I expected this would reveal itself in the data despite these substantial limitations.

RESULTS:
SMO PATTERN A (TOO DISTANT):  Mask order predates plateau or decline by too much time to be causal.
(2):  Nevada (1 month), Washington (3 weeks)

SMO PATTERN E (NOT UNIQUELY HELPFUL):  Mask order predates decline, but it was during a second spike and the state previously had a first large spike and fall without an order.
(4): Colorado, Indiana, Louisiana, Minnesota

CONCLUSIONS:
After studying all 50 states and Puerto Rico, I conclude that the patterns are so tremendously varied that it is not possible to assert SMOs are effective.  If you want evidence of successful SROs, there are only 6 Pattern B (Effective) states out of 34 candidates, and 3 of them are questionable.  Even if you include Washington (from Pattern A Too Early at 3 weeks) and the Pattern D (Not Lasting) and E (Not Uniquely Helpful) states, there are still only 13 plausible examples of effective SROs, and this is the most charitable categorization possible.

But the examples that serve best to show that SROs are not needed are Patterns G (Irrelevant), Pattern H (Counterproductive), and of course Pattern X (Control Decline).  Pattern H (Counterproductive) state California is the most stark example of putting an SRO in place and actually seeing cases continue to surge for over 5 weeks.  The twelve Pattern X (Control Decline) states are highly revealing because surge and decline curves happen without any SRO.  This and the fact that so many other cases show no clear relationship between SRO and cases make it seem most plausible that SROs just don’t matter.  That’s not to say that people wearing masks doesn’t matter.  As I said at the outset, I do believe in widespread mask use.  It’s just that the evidence doesn’t support the need for state-wide mandatory mask orders.

It’s worth noting that this paper doesn’t address the usefulness of mask requirements implemented by local governments (City, County) or by individual organizations (schools, businesses, churches).  My conclusions are only about mask orders at the statewide level.  Evaluating other kinds of mask orders would require a much more detailed analysis.  Theoretically, it could even turn out that the reason SMOs don’t have a clear effect is because local mask orders do have such effects.  My survey simply didn’t look at those issues.

FOOTNOTE
As a side note, I find Pattern F to be one of the more interesting because what I think happened in these states is they saw large case counts, and by the time they had a chance to put an SMO in place, the decline had already started to happen.  I also suspect that people in these states probably believe the SMO was effective because it came close in time to when people were most alarmed by the recent case counts.  But this is supposition on my part.