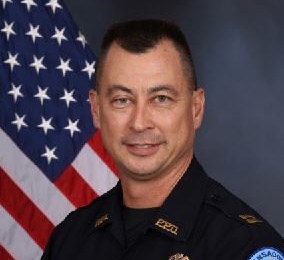 Acting Pensacola Police Department Chief Chuck Mallett tells NewsRadio there were two policy violations during the Tymar Crawford shooting that justified the termination of Detective Dan Siemen.  The first was a violation of the use of force when Siemen rushed at Crawford and pushed his head into the car, and the second was a premature decision to use deadly force.

USE OF FORCE:  Siemen had properly recognized Crawford was unarmed at that moment and holstered his weapon, and he had properly rushed to arrest Crawford based on concern he might flee. However, Mallett says Siemen had other options for subduing / arresting Crawford other than physically shoving him at first contact.  Going “hands on” would have been justified, but other tactics would have been more in line with Department policy.

USE OF DEADLY FORCE:  In addition, after the fight was already underway, at the point when Siemen shot Crawford, Mallett says he had not met the threshhold for justified use of deadly force.  The problem was not related to the number of shots fired.  Any number of bullets are justified until the perceived threat is neutralized.  However, Mallett says, “At the point of the shooting the Chief believes it was not necessary to use deadly force at that point in time.  The way our policy reads is you have to use reasonable and necessary force.  And so when we evaluated the situation, at the point in time he chose to use deadly force it was just not necessary.”  Even though Tymar Crawford had gained control of Officer Dufour’s Taser, “Detective Siemen had to make a decision in that split second with the information he had.  And when we looked at it from his point of view with the information he had and what he was perceiving at the time, we still do not feel like it had reached the level where deadly force was necessary.”

Former Detective Siemen has begun the process of appealing his termination, but Mallett expressed confidence that the Chief’s decision to terminate him based on these policy violations would be upheld, and he would not be rehired.  However, that decision will ultimately be the result of a process involving the Union and the Department’s administration.

RICK SCOTT CHALLENGES TURKEY AS ALLY; QUESTIONS WHETHER THEY SHOULD BE IN NATO