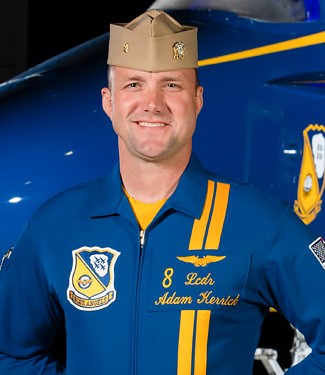 BEACH SHOW:  The Pensacola Beach Show was cancelled out of a concern for the well being of the residents of the Blues’ hometown.  Kerrick says the current spike in cases meant it just wasn’t safe for everyone to come out and watch the demonstration.  This would have been the first airshow of the year for the Team, and although it was a tough decision to make they believed it was the right one

RUSHMORE / DC:  The Team was not at risk during flying at either location.  They were isolated at Ellsworth AFB for the Mount Rushmore flyover, and they didn’t even land in DC, performing refueling in air and returning to Pensacola.  Moreover, those events were happening anyhow, unlike the Beach Show.  Kerrick also says they were ordered to perform those flyovers

NEW TEAM SELECTION:  Ordinarily, this would be the week for final selection of next year’s team members, but that has not been happening.  Kerrick says the plan is to bring new members in, but the precise details and timing of that have not been finalized yet.  There has been some speculation that the suspended season (so far) would lead to the entire team being held over an additional year.  Kerrick says there will be new team members next year.

HOMECOMING AIR SHOW:  NAS Pensacola is currently closed to the general public both because of security concerns after the terrorist attack in December and health concerns from COVID-19.  Nevertheless, Kerrick says the Team is currently planning to perform at the Homecoming Air Show this Fall, as long as the air show itself is happening.