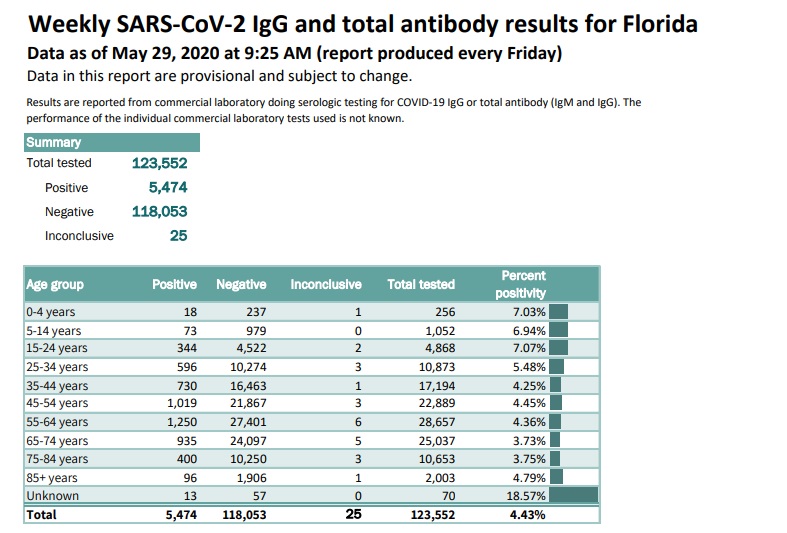 The Florida Department of Health has finally released the first batch of antibody test results, and it’s mostly bad news.  In order to understand why, let’s take a moment to explain the difference between antibody testing and PCR (Polymerase Chain Reaction, or what you know as swab) testing.

PCR testing looks for COVID-19 RNA and thereby identifies the presence of live, active viral load in the patient, meaning they are currently infected and also infectious to others.  This is the primary kind of testing that has been done in Florida and elsewhere throughout the pandemic.  These tests are highly accurate, but they can take a long time depending on which type of machine is used to process them.

Antibody tests (serology, or blood serum tests), on the other hand, test for the presence antibodies, the defense mechanism our bodies use to fight off infection.  Although there are many types of antibodies, IgM and IgG are the primary ones involved in these tests.  IgM antibodies are the ones your body manufactures quickly to fight off an active infection of the virus.  Over time (7-10 days) your body also produces IgG antibodies which provide a kind of institutional memory that you had this infection before and how to fight it.  The serology tests in use today by a wide array of manufacturers usually test for both.  In theory, this means they can tell that you are currently or very recently infected/infectious (IgM or both present) and/or that you were infected before and are (presumably) now immune (only IgG present).   (If you want to read more, including about other antibodies like IgA, this is a good resource:
https://www.cdc.gov/coronavirus/2019-ncov/lab/resources/antibody-tests-guidelines.html)

What this all means is that if you have high numbers of PCR positive tests, it’s a bad thing because it means you have a lot of people with the active disease who are infectious.  On the other hand, if you have high numbers of IgG antibody positive tests, this is a good thing because it means a lot of people had the disease and have recovered and (probably) have some degree of immunity.  This would include people who never had symptoms (asymptomatic), people who had mild to moderate symptoms, or people who simply had the disease before we knew what it even was.  The IgG antibody test, thus, is a way of finding out how widely the virus has penetrated the rest of society aside from people who became ill enough to warrant a PCR test.  With all that in mind, here’s what the Florida test results say, and why they are bad news for us.

In its first report issued Friday, FDOH says there have been 123,552 IgG antibody tests resulted in the state.  For comparison, there have been 995,886 PCR tests to date.  Out of these tests, ther were 5,474 positive for IgG, which means 4.4% of the people tested showed prior exposure to COVID-19. The numbers vary greatly depending on county, but even in Dade County, where the epidemic has been so strong, the antibody positive rate is only 7.5% on 19,786 tests.  In Escambia, the rate is 2.4% on 484 tests.  In Santa Rosa, the rate is 2.2% on 309 tests.  If we extrapolate these results to our entire population, this means that in our area, about one in 50 people has been exposed to COVID-19.  For Santa Rosa’s population of 184k, this would project to 4,054 people, and for Escambia’s population of 318k, this would project to 7,640.

Between our two counties, 11,694 previously unknown cases is obviously far more than the currently reported 895 resident cases.  However, it it far less than what many people had hoped to discover.

Early reports from other places indicated IgG test results 30 to 50 times as high as PCR test results.  Ours is 13x.  Now, it’s possible the early antibody tests were inaccurate.  It’s also possible Florida is different for reasons we don’t understand.  But the big reason people had hoped for a higher number was on the theory that maybe a lot of us already had this and didn’t know it in December, January, and February.  Also, we hoped that maybe if the numbers were high enough we might be well along the path to herd immunity.  Unfortunately neither seems to be the case.

Putting all the numbers (PCR and antibody both) together, you get a ceiling of about 12,500 people infected so far in our two counties out of 500,000 people.  This means 97.5% of us have not yet had COVID-19 and remain vulnerable to it.  Since the best estimates theorize that 70% exposure is the rough threshold for “herd immunity,” we have to admit that our 2.5% is nowhere close to that threshold.

The other bad news here has to do with the implications for how deadly this disease is.  If you’ll recall the early days of the pandemic, a 2% case mortality rate (CMR, the percent of people who test positive and subsequently die) was considered frighteningly high, since the CMR for influenza is more like 0.1%.  At that time, we feared COVID-19 was roughly 20 times as deadly as the flu.  The current CMR for Florida is 4.4% and for the United States 5.8%, far higher than seasonal influenza.  We had hoped that a high number of IgG results would dramatically lower this number.

If the numbers are a bit too much for you (and I should state that a lot of these numbers need more data and more refined analysis before I’d put confidence in them), think of it this way.  If a lot of people already had the disease with a given number of deaths, the chance of dying from it is lower than if fewer people already had the disease.  Since the antibody tests are returning such a low number, it means COVID-19 is not as deadly as we feared, but still much more dangerous than the mere seasonal flu.

Since each county has returned such different results both in total tests and in positive percentage, it’s really hard to figure out numbers for the whole state without a lot of crunching.  But when I ran it for our area I got a CMR of 0.26% and when I ran Dade County, I got 0.32%.  IF IF IF this data and those numbers are right, then COVID-19 is somewhere around 3 times more deadly than the seasonal flu.  However, since it seems to spread more easily, uses asymptomatic transmission, and we lack a vaccine, the chances that far more of us would contract it are the reason for the scary large numbers of potential deaths we are trying to avoid.  It is certainly far more dangerous (by orders of magnitude) for the elderly and people who have serious underlying health issues.

I should also note that several outside references seem to be reaching the general consensus that the CMR for COVID-19 is around 1.3%.  This number is about 4 times more than what I am extrapolating here.  Since my interpretations are based on merely one early batch of one state’s data, I am inclined to deffer heavily to the scholars.  What I’m saying is that even at best, given our numbers, this disease is still far deadlier than the seasonal flu.

ONE NOTE OF GOOD NEWS

If there is a good news item in this, it’s the fact that Florida has made the very wise decision to not commingle the PCR results with the antibody results.  To a casual observer, this might seem like an obvious choice, since the tests really measure such different things and have essentially opposite implications.  However, several states and even the CDC came to the opposite conclusion and at least initially were doing the exact opposite by mixing he two test results into one data set.  Even though the blunder is obvious, many people who should have known better made the mistake.  Luckily, our State Department of Health did not.

DISCLAIMER:  I am neither a health care professional nor a statistician.  I’m a philosopher / talk-show host doing my best to track and understand all this stuff.  If a professional sees any error I have made here, please let me know, and I will gladly correct anything I have wrong.  Since this analysis has not been peer reviewed, it is entirely possible I have made mistakes despite my best effort not to do so. 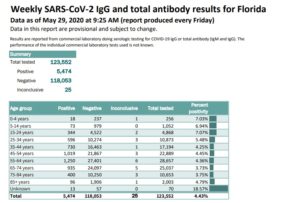 What percentage of people that contract covid19 require hospitalization?

Out of that percentage how many are considered elderly or have preexisting conditions that make them susceptible?

If you are such a fan of the numbers, how about you go look that up.

Stop spreading fear, and get some perspective.

The overwhelming majority of people are asymptomatic, then a large percentage have mild symptoms, and another large piece of the pie have what appears to be a bad flu.

It’s not what we thought it was. We thought it was something much much worse and acted accordingly. Nothing wrong with that. But now that we know what we now know, we also need to act on that information. It’s not about the number of new cases, it’s about the number of new hospitalizations. And from those numbers, how many of those new hospitalizations are elderly or predisposed?

Frank, I appreciate your concerns. What you probably don’t realize is that every day I publish an extensive set of data with analysis addressing precisely the sort of numbers you mention. Unfortunately, I publish them on our NewsRadio92.3 facebook page instead of here, so you probably just didn’t realize it. Every day this data set updates case totals, test positive rates, case hospitalization rates, case mortality rates, long term care facility data, and many other things. As for pre-existing health conditions, unfortunately that data is not yet public, but we all know that it is essential information for understanding who exactly is at risk and how much of a risk.
Just to give you a sample, here is the link for today’s report: https://www.facebook.com/NewsRadio1620/posts/3589190627776625?__tn__=-R
Thanks for taking the time to read the article and share your thoughtful comments!
Andrew McKay