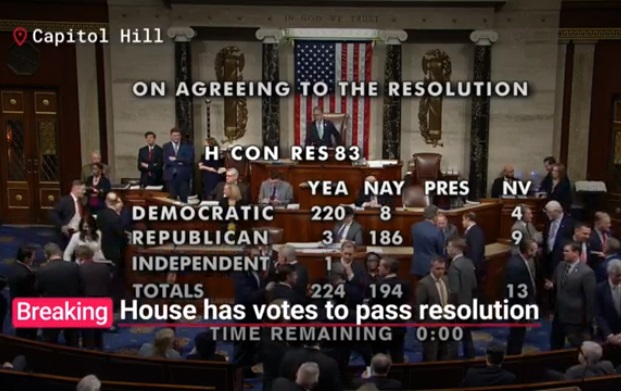 The House today passed a Concurrent Resolution attempting to prohibit the President from conducting military actions in or against Iran by a vote of 224-194.  8 Democrats voted against the measure, and 3 Republicans voted for it, including  Congressman Matt Gaetz.

Gaetz said, “If the members of our armed services have the courage to go and fight and die in these wars, as Congress we ought to have the courage to vote for ’em or against ’em.  And I think it’s ludicrous to suggest that we are impairing the troops from doing their job by not doing our job articulated in the Constitution to speak to these matters of war and peace.  I support the President.  Killing Soleimani was the right decision, but engaging in another forever war in the Middle East would be the wrong decision, and that’s why I’m voting for this Resolution.”

The Senate is expected to take up a similar measure, which under the 1973 War Powers Resolution requires only a majority vote of both Chambers to be binding.  However, two Supreme Court decisions in 1983 are widely believed to have declared the simple majority provision of the War Powers Resolution to be an unconstitutional “legislative veto.”  This means that in all likelihood for it to be binding, the Concurrent Resolution  would have to be sent to the President, who could then veto it and be overridden by a 2/3 majority of both houses.  The House today did not demonstrate such a super-majority is available.