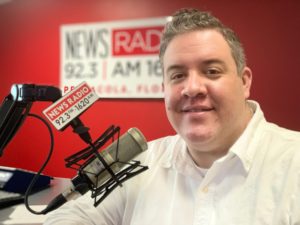 Joe is the News Anchor for Pensacola Right Now with Bobby Rossi. He started his broadcasting career in 2011 at WCLT Radio in Newark, Ohio.  He then took over as News/Sports Director for KWMT in Fort Dodge, Iowa. He joined NewsRadio 92.3 ▪ AM 1620 in 2014 as the afternoon News Anchor.  After a short detour into another local company and an on-air co-host at sister station ESPN Pensacola 1330AM/99.1FM, Joe returned to anchoring afternoon news in early 2020.  During his time at NewsRadio92.3 ▪ AM1620, he covered such breaking news events as the ‘witchcraft triple murders’, the Black Hawk helicopter crash of 2015 and the crash of Blue Angel #6 in 2016.

Joe follows the Ohio State Buckeyes, the Chicago Bears and Cubs. He holds the unofficial titles of ‘Biggest Soccer Fan’ and claims to have the ‘Most Impressive Sports Memorabilia Collection’ in Pensacola. He enjoys service in his local church with his wife, Jacquelyn.