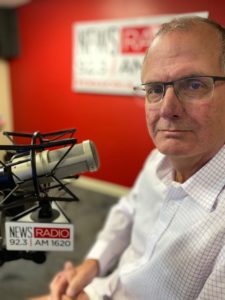 Mark brings more than 40 years of news experience to NewsRadio 92.3 ▪ AM1620, most of it reporting news on morning radio. Before coming to the station in late 2018, he reported and anchored news at stations in Kansas, Tennessee and Kentucky. As a street reporter, he covered everything from routine local government meetings to tornados, plane crashes and political conventions.  A former News Director in Nashville and Louisville, his work has been recognized by the Associated Press, Radio-Television-Digital News Association and most recently, the Florida Association of Broadcast Journalists.

Mark and his husband make their home in Cantonement and can be frequently found on Pensacola Beach.