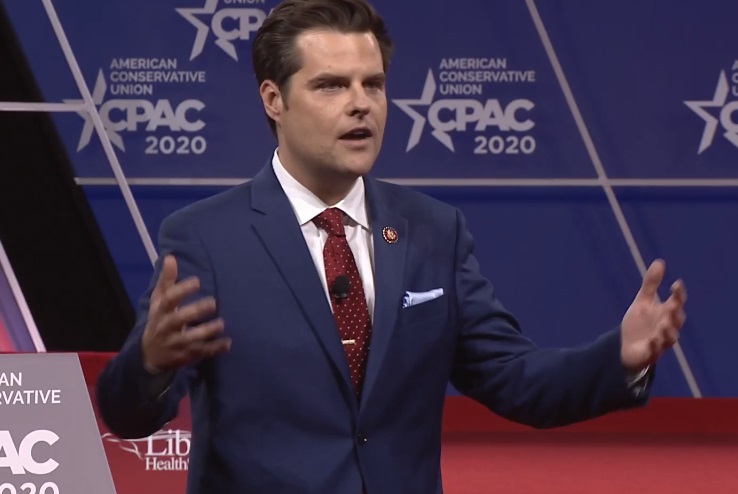 Taking the stage at the Conservative Political Action Conference, Congressman Matt Gaetz launched into a tirade against special interest political donors and the entire system of campaign contributions in Washington.  Noting that this system infects elected officials even from the time they are given their introductory training, Gaetz explained there is a system of rewards in Congress based on fundraising success that involves committee assignments and even chairmanships.  But he challenged this system, saying , “No corporate interest should ever be strong enough to export America’s bravest patriots to unfocused, unconstitutional forever wars or import cheap, illegal labor to undermine America’s economy here at home.”

Gaetz then announced his pledge:  “This PAC donation process, with the expectation of exchanging money for favors, renders public service, what should be the noblest of professions, dangerously close to the oldest of professions.  I’ve never turned tricks for Washington PACS, but as of this very moment, I will not pick up their money in the nightstand anymore.  I will never again accept a donation from a federal Political Action Committee, not one red cent.  The American people are my one and only special interest.”

He went on to warn that the coming fight between socialism and capitalism would be completely undermined if the form of capitalism that won turned out to be just oligarchy in free market clothing.  “If socialism is the bribing of voters with taxpayer money, then an oligarchy is the bribing of politicians with special interest money.  And just as we vow to never let the United States of America become a socialist country, so must we resolve to not let her slip into an oligarchy.”

Gaetz says he is the only Republican returning to Congress to make this no-PAC pledge.  He finished by saying, “Your home, my home, our home is not for sale to any special interest at any cost whatever.  Our independence from special interests is our loyalty to America.”