59.61 F
Pensacola, US
Trending on NewsRadio

Help Out Take Out

Traffic on the 5’s Mornings and Afternoons 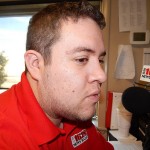 Joe joined NewsRadio1620 in November, 2014.  Prior to coming to Pensacola, Joe was the News/Sports Director for Three Eagles Communications, a seven-station cluster in Fort Dodge, Iowa.  Other previous stops included news reporting for WCLT Radio in Newark, Ohio; play-by-play broadcaster for the Licking County Settlers; and internships with the Columbus Clippers AAA baseball team and Sports Radio 97.1 ‘The Fan’ in Columbus, Ohio.  A fan of all sports, Joe pays particular interest to the Ohio State Buckeyes, Chicago Cubs, Indianapolis Colts, Bayern Munich soccer club and of course, the Blue Wahoos and UWF athletics.  Joe says he LOVES everything Pensacola has to offer, and looks forward to delivering your radio news every day.