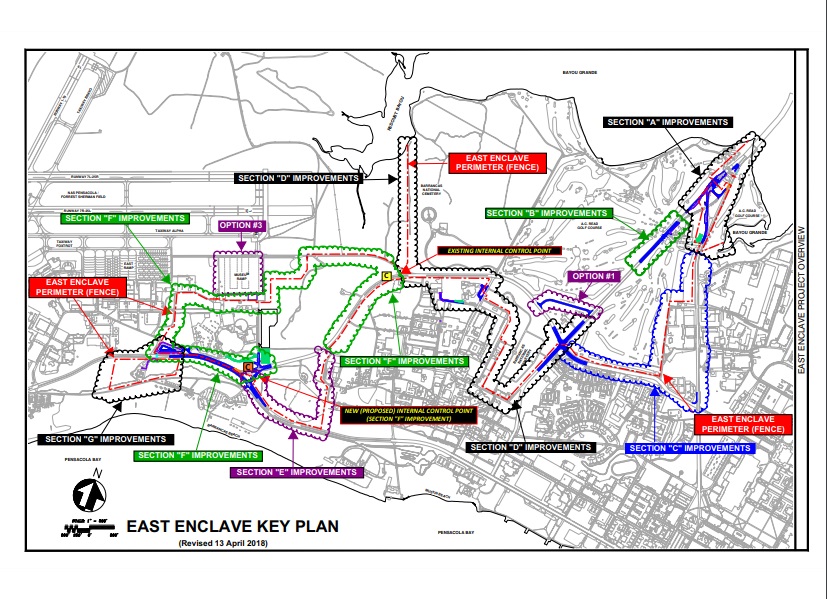 Yesterday, we reported that visits to the National Naval Aviation Museum are off about 50% due to the Base access restrictions put in place after the December 6th terrorist attack..  Today, Jon Hill, the Executive Director of the Pensacola Lighthouse and Museum tells NewsRadio the numbers for his facility are even worse.

December wasn’t too bad, only down 53% in visits but with a revenue drop of 70%.  Visits in January, however, are down by 82% with a 76% decline in revenue.  On any given day the picture can be even more bleak than this indicates.  Hill says previously on a normal day he might expect 500-1000 people, but now sometimes just 6-7 walk through the door.  “[T]here’s a car in the parking lot and everybody kinda runs to the window.”  He says civilian visitation is “abysmal, unless they have a military ID’d friend,” which would allow them access under the “Trusted Traveler” program.

These declines are particularly challenging for the Lighthouse because they do not receive either tourism dollars or US Navy money like the Naval Aviation Museum does.  They are entirely dependent on tickets, gift shop sales, and donations.  Asked how this loss of revenue is affecting them, Hill pointed out that good planning and a reserve fund for just such a contingency has prepared them to be able to endure temporary challenges like this.  “We’re not in a panic mode, by any means, but we’re in a concerned looking-towards-the-future mode for sure.”  He also said they had to cancel their big annual fundraiser that was scheduled for the night of the attack, which “put a dent in a lot of the future programming as well.”  Hill says they wound up donating the food from the event to first responders that night.

Asked what he thinks the future holds for civilian access, Hill was quick to say that he fully supports the Navy mission and definitely understands that safety for the students on base must be the first priority for the Navy at all times.  Much like Naval Aviation Museum Director Sterling Gilliam, Hill hopes that after the internal Navy review process is complete, a return to something like prior public access may be possible.  “We are optimistic that the Navy has looked into what they can handle….the military has done a fantastic job of securing the Base, and we’ve always felt secure….I think they’ve reviewed some of their processes, and once they’ve got those in place amongst their staff and personnel that they’ll feel more comfortable opening the base back up.”

One of the long-term questions is whether the Navy might construct an “Enclave” that would radically reorganize the perimeter of the Base, creating checkpoint-free access through either gate to most public facilities like the Naval Aviation Museum, Barrancas National Cemetery, Fort Barrancas, and AC Read Gold Course.  However, if this plan ever came to pass, the current proposals “would essentially put the Lighthouse behind fences and make it a non-public institution going forward.”  Hill says the plan would potentially include an overpass like in Gulf Breeze for pedestrians to walk from the Naval Aviation Museum to a site east of the Lighthouse, “But no, you wouldn’t be able to drive to the Lighthouse.  There’d be a fence running across the road there, and we’d have to figure out how to get people from across the street to the Lighthouse while crossing over, essentially, military fencing.”  Hill also says that the East Enclave Key Plan would also make it more challenging for the visitors they see from Gulf Shores and Orange Beach, Alabama, who prefer using the rear gate via Blue Angel Parkway.

In order to understand why the Enclave options would prohibit civilian automobile access to the Lighthouse, refer to the schematic.  The basic problem is that flight operations take place on the north side of Blue Angel Parkway west of San Carlos and personnel need to be able to go from there to the main portion of the Air Station to the east on the south side of the road.  Because of the Lighthouse location to the west (slightly) of San Carlos on the south side of Blue Angel, there is a direct conflict between the access for ordinary Base personnel and Lighthouse civilian visitors.  This is why the schematic shows two separate perimeters for the main portion of the Enclave and then the Lighthouse, with that possible walkover to connect them.

One additional note is that, at this point, the West Enclave Key Plan does not seem likely to happen at all, particularly because it is more expensive ($31 million vs $15 million for the East Enclave Key Plan).  Moreover, because the West Enclave depends on first constructing the East Enclave, the net result of doing both ($47 million) would be to create a completely new cut-through alternative to Gulf Beach Highway through the heart of NAS Pensacola, an outcome the Navy is unlikely to support. 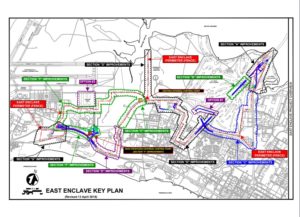 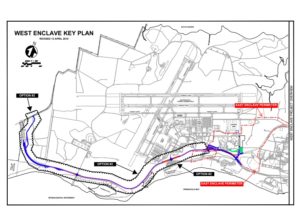 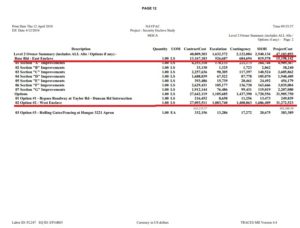