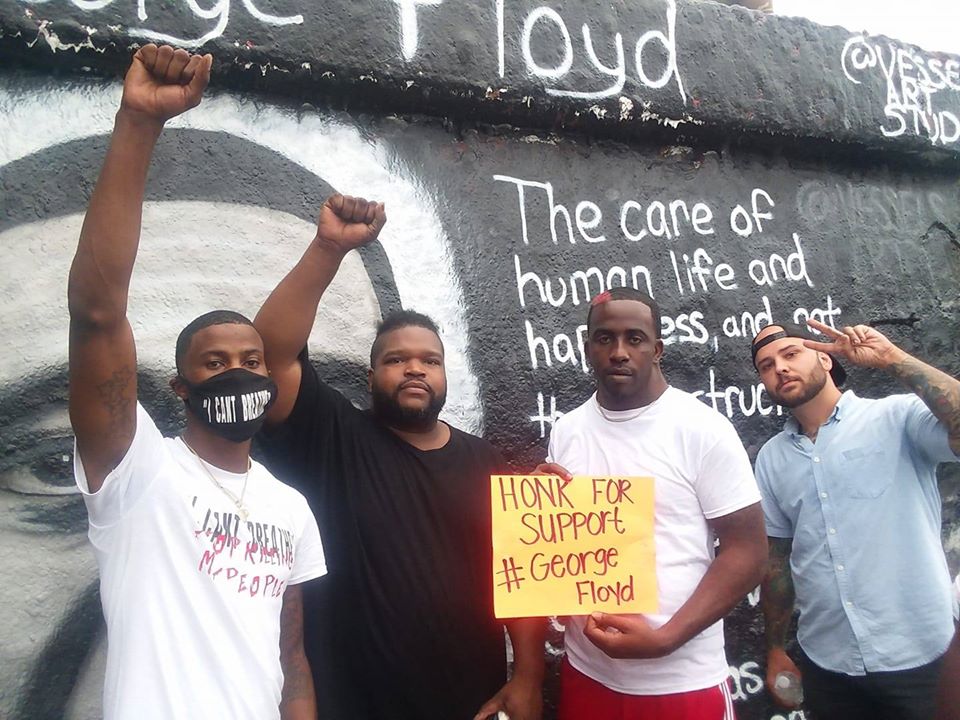 Caleb Houston, one of the two primary organizers of the Graffiti Bridge protests, tells NewsRadio that despite Mayor Grover Robinson’s urging to move to another, safer location, they plan to stay where they are until they feel their goals are being achieved. Primarily this means more thorough police training on the law and use of force as well as a society more committed to treating everyone equally in rights, access to work, treatment in the justice system.

One of the main reasons the protest is at that location is because of the original and subsequent mural to George Floyd.  However, Graffiti Bridge has always been a changing art space that is painted over constantly with new messages.  When asked whether he objects to people returning to that practice of painting over existing art on the Bridge, Houston says he understands that is the way this space has always worked.  He says the freshness of the George Floyd killing makes it still so traumatic and would “hope that people would be considerate of that and say, you know hey let’s give it a little more time being that it’s so fresh.” Nevertheless, he does not object to portions of the Bridge being painted over even now.  “We understand that that’s proper procedure, that’s pretty much how they do it.  Every 24 hours someone can paint over it, it’s how they’ve run it for the last years.  We have no issue with that.  We just ask that, while we’re down there, you know, to give reverence to the cause.”  In a follow-up conversation, Houston clarified that although he prefers to see the main mural of George Floyd stay, he has no objection to people painting the rest of the Bridge.

Since tomorrow is the beginning of Snapper Season, many listeners have inquired whether the 17th Avenue boat launch and trailer parking will be accessible to fishermen.  Mayor Robinson has said it is a public space available on a first come first served basis but that he has spoken with organizers to find a solution.  Houston acknowledges the importance of working with boaters and preserving access to the launch.  “What we have done is if anyone is trying to unload or get back on off the water, we most definitely respect that.  We have asked individuals that park out there to not block that area where they’re pulling their boats in or trying to get them out.  So we’ve been most definitely accommodating anyone that may try to do that, yes sir.”

When asked whether he and co-organizer Kyle Cole have a position on the Lee Square Monument being removed, Houston says, “That is very much something that we want to see done….my opinion I think it I needs to come down….We want everyone to feel comfortable.  We want everyone to feel safe in Pensacola, Florida.  And we want everyone to be treated justly, so I really feel like that is a good thing to do go ahead and take it down.”