LISTEN LIVE
PODCASTS
GET OUR APP
Trending on NewsRadio 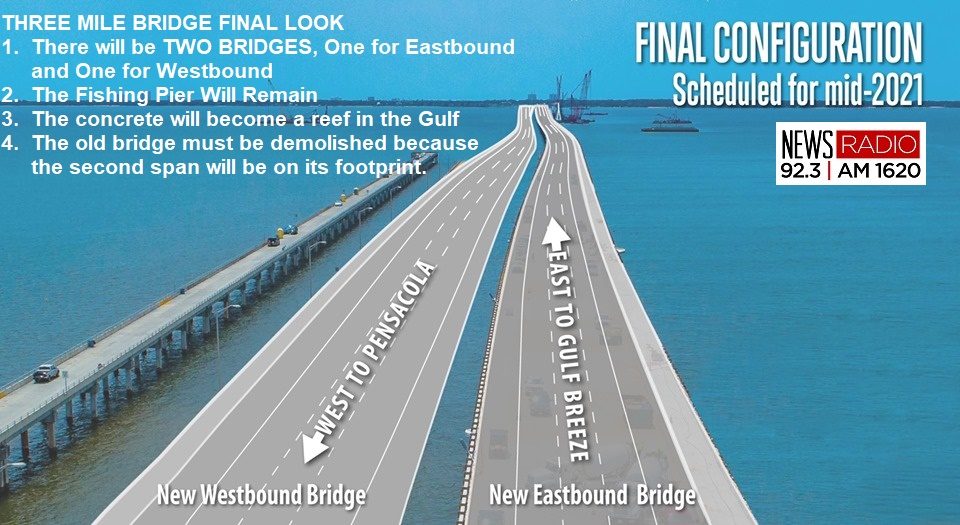 THERE WILL BE TWO BRIDGES:  Based on comments on a variety of posts across Facebook, many people apparently aren’t aware the new Three Mile Bridge is only halfway done.  There will be an entire second bridge, a mirror twin of the one we are driving on now.  When that “second span” is completed, the west/northbound traffic into Pensacola will all move onto that second bridge, while the east/southbound traffic into Gulf Breeze will stay on the current bridge.  Both bridges will eventually have just three lanes of traffic, a shoulder on both sides, AND a barrier-separated pedestrian/bicycle path as well.

OLD BRIDGE MUST COME DOWN:  Some people have wondered why the old bridge cannot be kept in place…for fishing…for camping…for an emergency alternative if there’s trouble on the new bridge.  This cannot be done because the second span will be built directly on top of the old bridge’s footprint.  The current fishing pier will remain in place and be open during construction.  As for a “backup” for the current bridge, when the second span is complete, it will actually serve exactly that purpose.  If for any reason one span needs to be closed temporarily, it would be possible to revert toTW the current both-directions design in a pinch.

OLD BRIDGE BECOMES A REEF IN THE GULF:  The demolition of the old bridge has already commenced, and it will be done without explosives and in such a way as to preserve the concrete intact enough to be transferred by barge/boat to a future reef site roughly five miles out in the Gulf from the Pensacola Pass.

NO MORE BOWFISHING OFF NAVARRE CAUSEWAY??