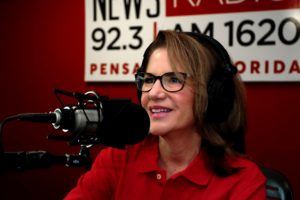 Reese produces Pensacola Right Now with Bobby Rossi. Her radio career began in Houston, Texas in the late 1980’s and has worked in various positions including News Director, Traffic Reporter and Morning Show Co-Host. She and her family moved to Pensacola to be closer to her parents in 1993. She has been a local small business owner and has always been active in the Pensacola community. She continues to serve as an advocate and board member for local non-profits.