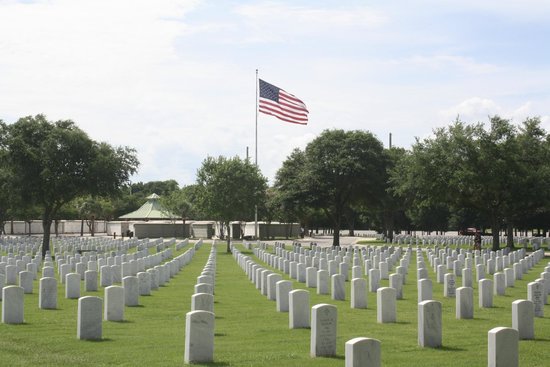 Speaking at a Chamber of Commerce event last week, NAS Pensacola Commanding Officer Captain Tim Kinsella lamented the fact that necessary security changes in Base access in the past few years have led more than one hundred families to disinter their loved ones from Barrancas National Cemetery at a cost of $10,000 each out of their own pocket.  Kinsella said, “That’s a crying shame,” that families felt they had to make this choice rather than go through the headache of navigating Base security in trying to visit their loved ones.

Most of these disinterments took place several years ago after the security changes took place which predate his administration and were handed down from big Navy.  But Kinsella said he understands why this all came as such a shock to longtime residents.  “We live in a much different wold now.  So, the security on the Base is different now than when you were kids.  It’s different than it was seven years ago, because of the security environment that we live.  And that’s made a lot of people upset because Pensacolians feel like that’s their Base.  ‘How dare you tell me that I can’t come on that base.  I used to play out there, I used to play in the Lighthouse, I used to run up and down Barrancas Hill, whatever it may be.’  But we don’t live in that world anymore.  But it is part of my job to try and at least maximize public engagement on the Base to the best I can because it’s good for you, it’s good for me.  I want you to come out and see it.”

Kinsella explained some of the improvements he has recently implemented to improve access to the graves.  For instance, families are being given front-of-line treatment at the Visitor’s Center.  Also, the Veteran’s Administration has agreed in principle to start providing guards to escort families to the grave so that they can stay as long as they want without being hurried.  Prior to this, the task fell to NASP’s own security team, which had limited time resources to do this within the secure portion of the Base.

Another change Kinsella says he wants to make is moving the front gate back a few hundred feet so that the perimeter is behind the Visitor’s Center rather than in front of it.  This would greatly facilitate access because people could go there on their own outside the secure area.  He says he is working on that, calling it a “priority” for him.

The long term plan, which Kinsella refers to as the “Enclave” is to have a scenario in which access to the public portions of the Base such as the Museum, Lighthouse, National Flight Academy, Historical Sites, and Barrancas would be physically carved off for public access while the secure areas could be protected as Navy policy requires.  This is a long-term solution, which will be expensive in addition to the challenges posed by the physical arrangement of locations on the Base.

SANTA ROSA SHERIFF:  WE AREN’T TRAINING NEW K-9s FOR MARIJUANA; HEMP IS BEING GROWN IN JAY